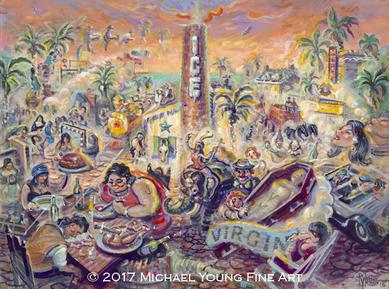 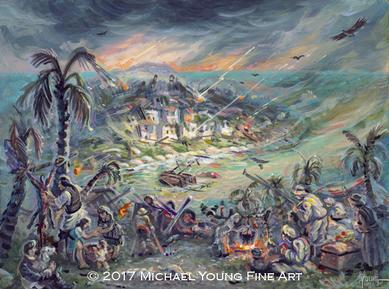 The Gold in Statue

While a large statue of Joseph is being moved, it falls and hundreds of gold coins burst out. The pack mules carry gold bars which are stacked on a table. Ursula holds her ears to free herself from the constant accordion music and cock fighting by her twins, José and Aureliano. They play a sex game with the same confused woman. Aureliano applies bank notes on the inside and outside of their house. A Christian does his business with a female donkey as darting orange disks appear in the sky. Ash Wednesday was devastating when rebels began shooting anyone who tried and failed to remove the ashes from their foreheads.

The Buendía family stroll the gypsy marketplace when what appears to be a large diamond catches their eyes. Instead José, Ursula and boys discover ice for the first time. José’s mind begins wandering to where the sparkling ice transforms into a large mirrored city in the sky. Melquiades, head of the gypsies selling and trading unique items also displays his magical new teeth. Incest may be the reason for removal of a pig’s tail, a juggler with six arms, a firing squad executing Aureliano and a retired galleon with beautiful flowers and plants. José experiments with alchemy. 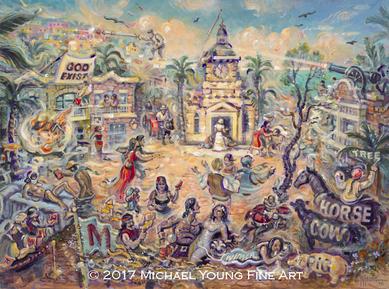 Hot and humid. Workers cut and load bananas on the truck for depot delivery. The banks of Macondo look like large dinosaur eggs, white rounded stones. The steamer and airplane make an entrance. While hanging clothes Remedios the Beauty begins rising into the sky.

The houses are being invaded by unruly vines and weeds cracking and breaking the concrete foundations. Moths, lizards, ants and termites invade and destroy. Lye spray and an old broom are used to attempt to control the weed and pest attacks. José Arcadio forces four boys to enter an orgy life style and after being whipped they get revenge by catching, beating and drowning him. Then they discover his sacks of gold hidden in the floorboard. After being paid for sex, the large dark but pretty Nigromanta eats and drinks in bed. The apparition descends the staircase. A lovely girl is playing Victrola records. José is examining important parchments. Yellow flowers are bursting from the cracks and creases. Chickens are being prepared for chicken head soup. 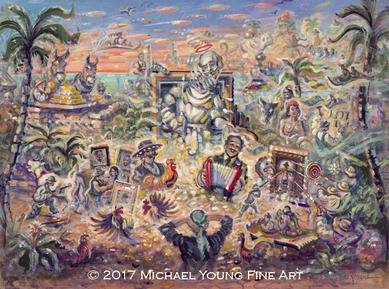 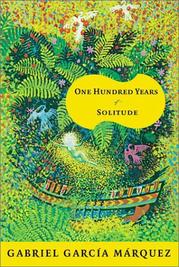 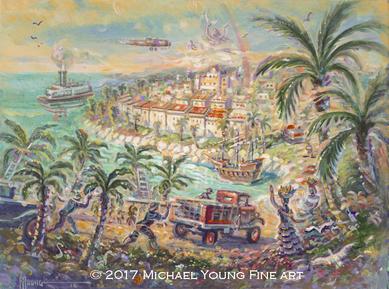 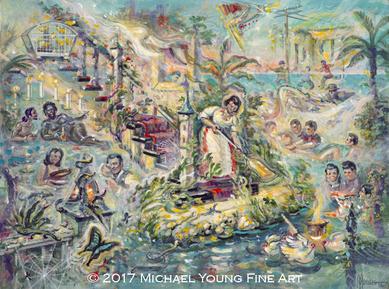 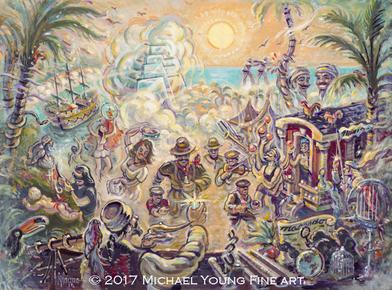 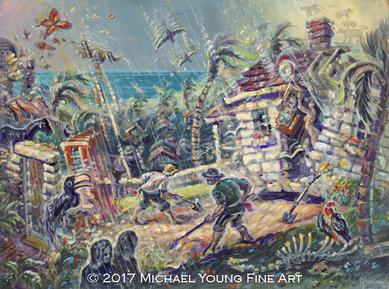 This is a mirror image of painting number two, a before and after: the banana truck is now overturned, the plane wreckage can now be seen and the Spanish galleon sinks by the shore. The good people of Macondo gather their resources and work together following the horrific storms to gradually rebuild the city.

​One Hundred Years of Solitude

It started in 2015 when my friend Mr. Fred Whitehead asked if I would be interested in doing a series of paintings of the classic book "One Hundred Years of Solitude" written by Gabriel Garcia Marquez. A year later my lovely wife Vickie encouraged me to begin.

I worked from a soft bound copy as well as the audio version which was very helpful listening while working! I began gathering some of the most interesting points of each chapter and very soon realized it would take many images to capture the stories described by Marquez. After much reflection I settled on 10 paintings, feeling they most describe the adventures of José Buendía and his family, for the public’s ultimate enjoyment straight from the master’s creative mind.

Prints Available ​for Purchase by Clicking on Images!

In the town square men line up for sex with a girl who must pay her family’s debts from a fire. Insomnia takes over the village with folks wondering around aimlessly.  Sign painters are needed to recall and label things—“God Exists” for example. Handsome tattooed hunk picks his girl; José loses it and has to be chained to a tree. A card reader tells fortunes. José gets down on all fours to stop the wedding and prevent the bride from entering the Church. The inspector is dictating the color of the village houses. Rebeca and Pieto are dancing merrily in the square. Rebeca is found eating dirt and drinking whitewash. 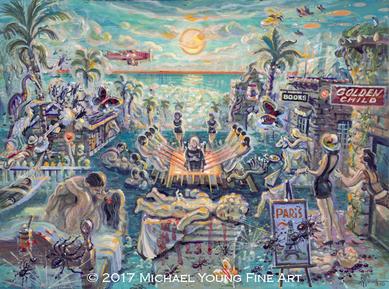 The Circus parade rolls through town with a girl dressed in gold riding a decorated elephant while clowns entertain with the Ice Plant as a backdrop.  The virgin Ameranta is knitting her death shroud. Two girls are experimenting with sex, smoking and drinking and    riding in an automobile to the motion pictures. The waitress brings another large course but the eating contest already has a winner: Camila Sagastume, a totemic female known as the elephant. The school girls with their beanies and uniforms are watched over carefully by the nuns.

The soldiers gather 3,000 banana strikers for a meeting in the town square. Marksmen are perched atop buildings, and when the Captain gives the order, they open fire with machine guns killing all. Their corpses were loaded into 200 boxcars and deposited into the sea along with rotten bananas. Aureliano’s mother claims she found him floating in a basket on the river. Yellow butterflies invade the town while scavengers hover above.

Pilar’s death request was to be buried in her favorite wicker chair. Eight men with ropes lower her into her grave under the dance floor while the mulatto ladies sing hymns. Fearing the number thirteen an old priest is resting in a hammock. The Golden Child brothel is open for business. The Book Store with girl and white dog.  The baby born with a pig’s tail dies after the removal of the umbilical cord and his body is carried off by ants. Aureliano and Amaranta make love when and wherever they choose unaware of the luminous orange disk flying through the sky. Races condemned to one hundred years of solitude do not have a second chance on earth.

The rain does not let up for nearly five years and life is increasingly becoming unbearable. Townspeople resort to wearing oil cloths covering their heads to protect them from the deluge. Ursula loses it and begins hurling china and a crystal mirror. With the pantries bare Manna begins falling from heaven. A recovery crew is hired to search for the canvas bags of gold. Digging under the house makes the damaged foundation give way, collapsing the house. Finally one day the sun comes out drawing forth the stench of exposed skeletons and carcasses. 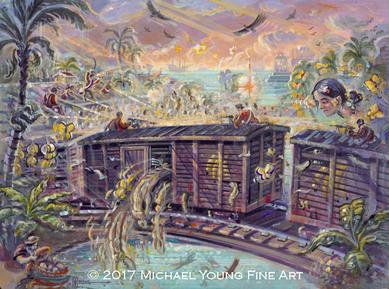